Dorsal wall resections are a primarily method of gaining access to the damaged laminae under the dorsal hoof wall which may contain infections, entrapped fluids or exudate. One of the earliest accounts of a procedure similar to this was published in 1906 by H Coulton Reeks (view). I wonder if Burney Chapman read H Coulton Reeks book?

What ever is found after the resection many equines show a significant reduction in pain regardless of what is released.

With the vascular crisis theory when little or no exudate is released after a dorsal wall resection, it is difficult to explain why resected feet are less painful, but with the dorsal wall lifting theory this pain relief can be attributed to the removal of the extension forced being exerted onto the laminae by the lifting dorsal wall and the upwards pressure of the sole.

If there is any suspicion of entrapped gas or fluid under the dorsal wall, it's vital that a resection is preformed, particularly if a heart bar shoe or similar support shoe is to be applied to the foot, failing to resection the dorsal wall will intensify the pressure of the entrapped fluids and increase the pain levels, this is often miss-interpreted as the laminitis getting more severe.

Note the near normal alignment of the phalangeal bones (P1,P2 & P3) in fig.1. 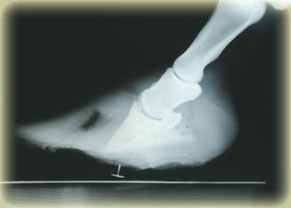 Exudate can also be entrapped between solar surface of the distal phalanx and sole, this situation in not very common and occurs in post-acute cases.

Equines with exudate entrapped under the sole will often be recumbent, refusing to stand. This can sometimes be identified with radiographs. 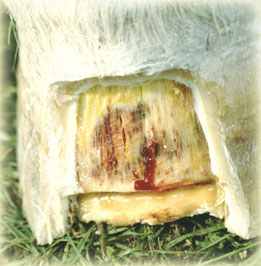 In chronic cases a simple abscess within the laminae is a common cause of lameness. Often the site of a lamina infection is difficult to gain access from the solar surface of the foot as they can be located high up in the laminar wedge. Drainage can be made by cutting a vertical groove in alignment with the infected lamina, removing a small section of external hoof wall. In a lamina abscess often only a small volume of pus released, when compared to a solar abscess. 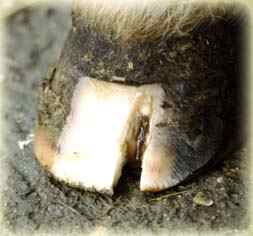 Burney Chapman's method for aftercare of resected hooves: The wound is treated daily with "sugardine" and covered with disposable diapers. "Sugardine" is a paste made from Betadine surgical scrub and normal granulated table sugar. The mixture should be stiff enough to be manageable. If there is a risk of infection the resection should be covered and changed daily 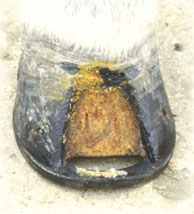