History of grooving procedures for laminitis

A literature search has found two references to early accounts of hooves being grooved in the treatment of laminitis or founder.

These procedures are included for reference only.

I am not advocating their use, but have included them for completeness and as evidence that grooving procedures described in the past seem to have offered pain relief or aided the laminitic equine. The reliability of these accounts is however difficult to determine.

Andrew Snape's book 'Anatomy of an horse', was published in 1683. Written in the English of the day, it's difficult to read but he makes a passing reference to rasping five or six grooves into the hoof wall of foundered horses and claims good results for the procedure.

[It helps when reading this text to replace 'f' with 's']

The next and laft Bone of the Foot is the Coffin-bone, fo called (I fuppofe) from its hollownefs on its under-fide. Its figure is femilunary or Half-moon-fafhioned. It is thick at its top, (where it has cavities to receive the heads of the lower end of the little Paftern) but thin and broad at its bottom and toward its edges, for its more firm fixing upon the ground. Its fubftance is fungous or fpongy, having innumerable little holes piercing through its fides for the paffage of the Veffels; as alfo very many fmall Sinus's whereinto are implanted the ends of the Tendons of the Mufcles that move the lower part of the Leg, and the Foot: whofe Fibres being at any time affected either by bruifes, ill fhooing, or by ftanding in the water after hard riding whilft the Horfe is hot, or but by ftanding ftill in the Stable for feveral days without having the Feet ftopt up, and the like; I fay the tendinous Fibres being affected by thefe or other means, caufe the Horfe to have fuch great pain in his Feet, that he can fcarce endure to tread upon them; which lamenefs we call a Founder. Now this diftemper is fo much the harder to cure by reafon thefe Fibres lie fo far out of reach, moft of them running on the upper fide of the Bone (betwixt it and the Hoof) and not to its bottom; fo that the Hoof growing upon the fides as the Soal doth at the bottom, there is great hazard but we fhall mifs of effecting a cure, if we onely pull the Soal out, and do not cut part of the Hoof off alfo. This is not my bare opinion, but the experience of thofe that have had good fuccefs in curing foundred Horfes, who by rafing the Hoof from the Coronet or top of it to the very bottom, in five or fix places, untill they have made the Bloud come, and then applying their remedies to thofe places, have made thofe Horfes found, whom the drawing out of their Soals would not cure.

In 1906, H Coulton Reeks makes a reference to Smith's operation in his book 'Diseases of the horses foot', I believe this account inspired Burney Chapman to develop the dorsal wall resection procedure, again the author claims good results. 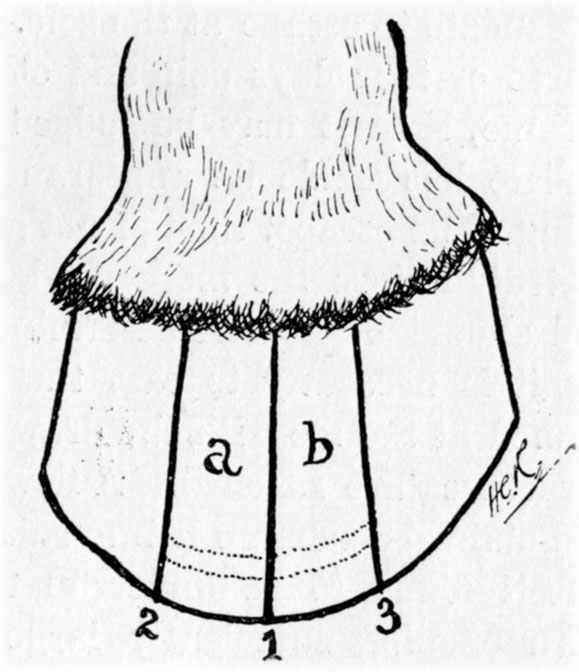 "Other operators sometimes give the exudate escape while making the grooves in what is now known as 'Smith's Operation.'

In this operation the hoof is so grooved as to allow of its expansion, so relieving the pressure on the sensitive structures within it. Incidentally, the inflammatory exudate is given exit. The animal is cast, the shoes removed, and three vertical grooves made in the wall. The first is cut down the centre of toe, extending from the coronet to the ground surface. The second is made to the right of this, and the third to the left, each following the direction of the horn fibers, and each distant about 2 inches from the first (see 1, 2, and 3, Fig. 120). 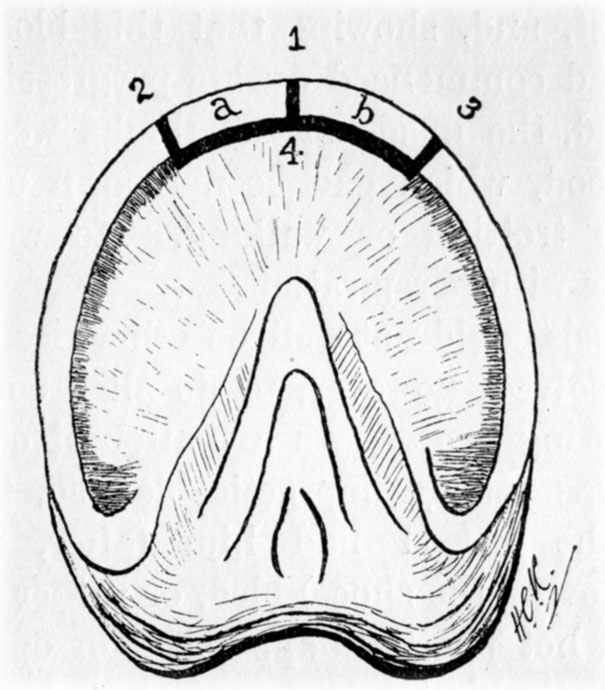 If thought wise by the operator, the two pieces of horn a and b may be isolated, and the exudate given exit by making the fourth groove in the position of the dotted lines in Fig. 120-that is to say, at the lowermost portion of the sensitive structures. By this means the sole will be left intact.

Fuller instruction for making the grooves and the instruments required will be found described in Section C of Chapter X.

The animal should be afterwards shod, and the bearing on the portions a and b of the wall removed. Almost immediate relief is afforded the patient."

Full text of the book can be found at:

Farrier Ken Stretton grooved this pony circa 1990 using a procedure similar to the one described by Andrew Snape. At the time I could not understand how this may have helped this pony. The owner was adamant that the procedure had help the pony to become sound.

I wonder if Ken had read Andrew Snape's book?