The first time I saw pony Liam (name changed) was just after my client had bought him. I could see that he had slightly broken up hooves but thinking like most farriers would, I expected his hooves would improve under my charge. Unfortunately, this was not to be the case and as the winter progressed his hooves gradually deteriorated and by April 2010 the stratum externum was breaking away from the stratum medium, not just in the area around the nails but also around the toe of the hoof, an area that normally stays intact when hooves break up. 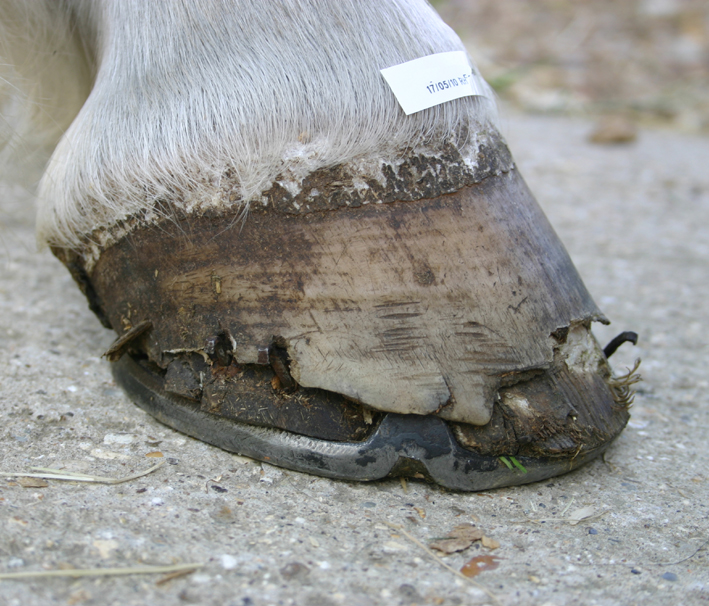 As all four hooves were badly affected and thinking that a bacterial infection was causing the problem I decided to ask the help of the clients vet and together we took biopsies from the affected areas of Liam’s hoof wall. The results came back as normal, no abnormal bacteria associated with breaking hooves were found in the hoof. We decided that the entire areas of broken hoof should be removed but doing this to all four hooves at once was out of the question as it would make the pony very lame. Instead we decided to treat one hoof per week, in this way if we encountered problems it would be with only one foot. So each week all the broken hoof from one foot was removed and for the next twenty four hours the hoof was poulticed with iodine to ensure the hoof was sterile.

The hoof was rebuilt with Jameg glue [1], then an aluminum shoe [2] was glued to the repaired hoof, blue children's modeling dough was used on the inner border of his shoe to prevent the glue or shoe pressing onto the sole of his foot.

This was time consuming and expensive but worked well. For the next few months the glued on shoes were replaced as they started to become loose or were lost altogether, Liam was comfortable in the shoes and they didn’t cause him any problems. I noticed his hoof reacted slightly differently to the glue, in that the surface of stratum medium adhered less well to the glue, something I had not observed in other types of broken hooves. I have experienced cases of breaking hoof walls and seedy toe in other breeds both in everyday practice and as a referral farrier at an equine veterinary practice and I can safely say that Liam’s feet were different although at the time I wasn’t sure quite how, it certainly was not a case of severe seedy toe.

When the wall had re-grown down to the ground surface, I could still see that his hoof was still not normal but tried again using nailed shoes, unfortunately his hooves soon started to deteriorate again. In discussion with the client it was decided to try Liam barefoot as an alternative solution to the problem but Liam soon became very uncomfortable and foot sore, as all his weight was being carried by his sole, as the hoof wall was crumbling away, we realised that this was not going to solve his problem and went back to gluing his shoes. Liam had been bought for showing but as his feet were repaired with glue and the rules for showing do not allow filled or rebuilt hooves, he could not be shown. Considering that the only way of keeping him sound was with rebuilt hooves and glued shoes, meant his hooves were going to be a perpetual and very costly problem. After a lot of soul searching, the owner in discussion with her vet decided he would have to be put down.

It was eighteen months later at a Farriers Focus Day, that a farrier (Jeff Newnham) who has produced a horseshoe for broken hooves called Pro-Glu first mentioned hoof wall separation syndrome in Connemara ponies to me. Some quick research on the internet[3] revealed that there did seem to be an ongoing hoof wall problem within the Connemara population which some were calling ‘Hoof Wall Separation Syndrome‘(HWSS). Gauging what proportions of Connemara's have had problems or how severely it has affected them was difficult to establish, certainly some severe cases have eventually resulted in euthanasia.

Some contributors reported an apparent absence of lipids in HWSS affected hooves, a type of fat normally found in hoof, its function is thought to provide protection to the hoof structure by repelling excess moisture. Reading the comments of others about HWSS, I knew that this was what I had been dealing with eighteen months earlier.

Current thinking is that HWSS is a congenital genetic problem, the genes thought to be responsible are said to be recessive within an autosomal chromosome, autosomal chromosomes are not responsible for deciding the sex of the animal and therefore both males and females can carry the defective gene. Both parents must be carriers of the defective recessive gene in order to produce a chance of a foal with affected hooves. The possible outcomes are; a 1:4 chance that the foal will have HWSS, a 2:4 chance of a foal with good hooves but still a carrier of the defective gene and a 1:4 chance of producing a foal which is not a carrier and has good hooves (see diagram 1).

These chances are random and any outcome is possible for each foal born.

If one parent is a HWSS carrier and the other is not, then there will be a 2:4 chance of the foal being a carrier but it will not have HWSS hooves (see Diagram 2).

The genome for the horse was sequenced for the first time in 2007, opening the opportunity to isolate which genes may be involved in HWSS. Currently research into HWSS is being carried out by Dr. Carrie Finno, DVM, PhD at University of California Davis and is focused on identifying the genes which are associated with the production of keratin, the protein which is used to produce horn and hair. DNA samples of both normal and affected animals are currently being collected and compared. The goal of this research will be the ability to identify carriers of HWSS with a simple blood test. So they can be isolated and excluded from any future breeding program. Until then it will only be when an affected foal with HWSS is born that it will alert the breeder that its parents are both carries of HWSS. As this may not be the first foal from this dam and sire, previous foals may have already been produced and unknowingly sold on, as there were no indicators at that time there was a genetic problem.

When only a few ponies were carriers the chances of both parents being affected must have been small, the odd foal with poor quality hooves would have been seen as a random occurrence of bad luck. Other foals would have been born as carriers with good hooves, in this insidious way HWSS has secretly crept into the population and as the ponies have moved around the world, so has HWSS. Today cases have been reported in many countries including UK, Ireland, Sweden, New Zealand and the USA. From the one case that I have experienced, Liam's problems were of a greater magnitude than any broken hoof I had met before. The only solution to avoid future cases of HWSS will come from revised breeding practices which acknowledge the underlying genetic causes. If the first-class reputation of the Connemara is to be upheld, then both breeders and individuals will have to address this problem in an open and honest way. 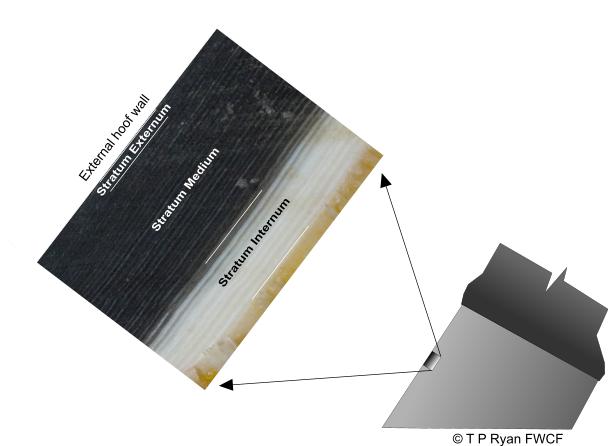 The hoof wall is comprised of tubules of keratin which grow downward from the Coronary band. Distribution or the density of the horn tubules reduces through the three main zones of the hoof wall, the stratum externum, stratum medium and stratum internum. The greatest density of horn tubules is in stratum externum where on the surface of the hoof wall they are slightly flattened to become oval, which is thought to help retain moisture. The stratum medium forms the bulk of the hoof wall while the inner stratum internum has the lowest number of horn tubules and forms the laminal interface with the dermal tissues, it is usually un-pigmented and can be seen as a white line on darker coloured hooves. Between the horn tubules is inter-tubular horn which binds the horn tubules together, this has intermediate filaments which are laterally orientated fibres which help to bind the horn tubules together and resist cracking. The outer stratum externum is more rigid than the more flexible stratum medium, while the stratum internum is the softest, this gradient of reducing stiffness helps the hoof capsule transfer energy smoothly between the wall and the dermis and also allows the hoof capsule to expand in shape under loading and return back to it's original shape when the load is removed. Transfer of weight from the skeletal structures is primarily from distal phalanx (pedal bone) via the hoof wall to the ground surface, the solar surface can only support a small proportion of the total weight of the horse before it causes pain.