What happens before pain is observed?

Laminitis is often a sequel to a disease or condition which in some cases triggers laminitis.

All the listed conditions below are known to induce laminitis.

The rate of quarter growth and the shape and strength of the hoof capsule will determine the duration of the developmental phase and the severity of the subsequent laminitis.

Not all equines become laminitic

Despite encountering what could be a triggering event or being obese, not all equines become laminitic, one possible reason is that weak hoof capsules with flaring or ‘dissipating quarters’ will harmlessly splay outwards when the quarters start to grow faster (Fig 1) and not cause the hoof capsule to distort at the dorsal hoof surface. Breeds which have weaker hoof capsules, for example Thoroughbred horses are usually under represented in laminitis cases, while cases of laminitis in cob types are common. 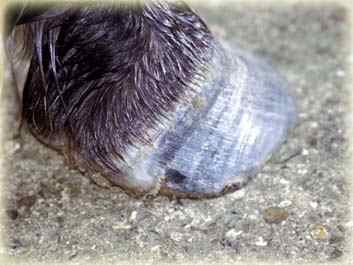 Generally, stronger hoof capsules are intolerant to rapid heel growth and become severely laminitic while weak flaring hooves don't distort at the toe so the laminae are not traumatised.