Once the acute phase passes, if a normal pattern of hoof growth has not re-established i.e. slightly slower growth at the quarters compared to the toe (see Hoof growth), then the hoof can be classified as chronic. The old undistorted hoof will have grown down to be replaced by a continuously distorting hoof. This will have the characteristic diverging growth rings, which have been long associated with chronic laminitis.

The intense lameness seen in acute laminitis is replaced by a lower level of pain, partly caused by the differential in hoof growth and partly by the lost integrity of the hoof's shape. The prominent 'dropped sole', often seen in chronic laminitis can be reinterpreted as a lifted dorsal wall leaving the sole and distal phalanx vulnerable to pressure from the ground surface(Fig. 1).

All chronic laminitic feet are characteristically boxy, this leaves them more vulnerable to the effects of rapid heel growth, which due to the straight-sided nature of the hoof, which will focus all hoof distortion into the dorsal wall area. Constant rasping of the dorsal hoof wall will be necessary to maintain the appearance of a normal hoof shape, this process may reduce pain, as the thinned dorsal wall will exert a weaker lifting force onto the underlying laminae.

The long term prospects for chronic laminitic equines is very poor, gradually the lameness becomes more severe as many internal changes take place within the foot, changes in the shape and demineralisation of the distal phalanx being the main factors. Life expectancy for chronic laminitic cases is difficult to predict but five to eight years is a typical range. 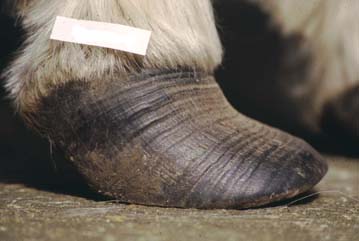