Founder is the term given when the distal phalanx becomes unstable within the hoof capsule, this occurs when the laminal bond has been weakened and is unable to continue transferring the weight of the horse or pony from the skeletal structures through to the hoof capsule.

Although laminitis and founder are colloquially confused (and laminitis can in severe cases result in founder), it is important to recognise that laminitis (inflammation of the laminae) and founder (prolapse of the distal phalanx) are not the same because they require different remedial actions.

The distal phalanx usually founders in one of two ways, either 'rotating' or 'sinking' (sometimes a bit of both). The dorsal wall lifting theory proposes that pedal rotation is associated with long narrow hoof shapes which distort at the toe and sinking is frequently seen in hooves with rounder hoof shapes, where hoof capsule distortion is not just focused at the toe but the whole hoof capsule becomes more generally enlarged. This traumatises a larger area of laminae which causes the toe and heel areas of the distal phalanx sink downwards within the hoof capsule.

The pictures below show a horse with different shaped hooves and illustrates the concept of hoof shape determining if the distal phalanx sinks or rotates.

Hoof capsule distortion is not obvious at this early stage and a disruption ridge has not yet become visible, but a depression just above the coronary band is palpable at the toe in the left foot. In the right foot the depression extends towards each heel, which is consistent with sinking of the distal phalanx.

The horse shown here has different hoof shapes on each limb, one narrow and one rounder in shape. It is often stated that sinking is seen in the more severe cases, but I believe that the hoof shape is the main deciding factor. This unfortunate horse helps to illustrate this as his right pedal bone has 'sunk' while the left pedal bone has 'rotated'. 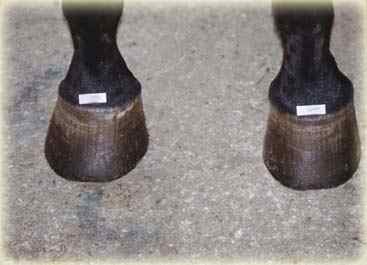 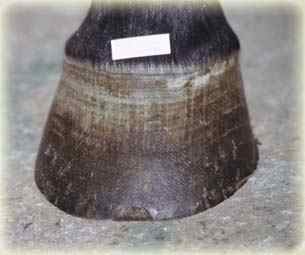 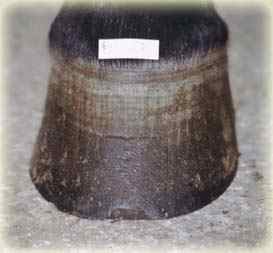 When the heels grow faster in round hoof shapes, the hoof capsule distorts more generally, including towards the heel area (See Round hoof shape). 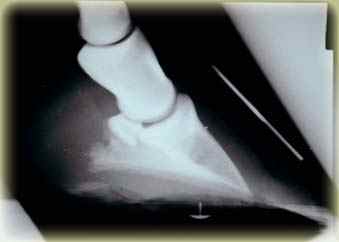 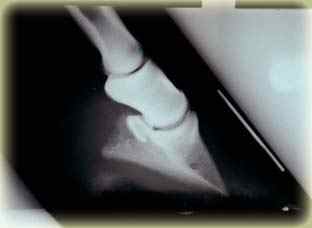 Pedal rotation, the tip of the distal phalanx is pointing downwards and diverging from the white maker line.

Shape determines how the distal phalanx will founder